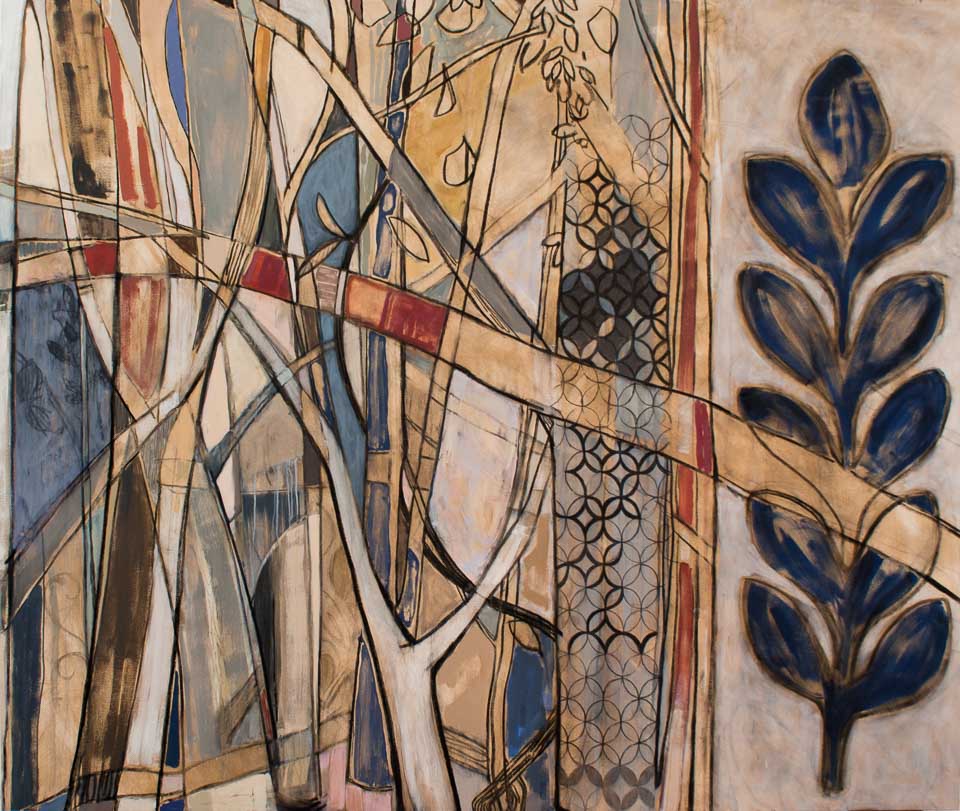 Jaap paints within a tradition of organic abstraction. It is a freeing and expressive mode of painting. Jaap’s canvases interpret the enigmatic moods of nature—its quietude, its intensity, its diversity—into a fluid system of symbolic associations. Applying color variations, textural materials, and tapping a reservoir of nature’s shapes are some of her generative methods.

The great abstract artist Joan Mitchell confessed in 1986 that painting “had something to do with being alive.” Likewise, Jaap’s paintings draw from life’s complex inventory—evocative shadows and stains and smoke, but also internal lightness, silent yearning, and the push against mortality’s dogged minions. Ceaseless creativity is like medicine or a power tool. Painting sums up the epic task of living every day.

Often, Jaap’s paintings reflect what it is like to be an organism in a world of organisms. The physical act of creating a painting is a performance of living fully. The labor is vital. Jaap feels her way through the creation of her paintings. She sometimes presses a palm, a forearm, or the side of her hand into a still-wet glaze to reveal what lies below, creating organic shapes, or windows, that carry the form of the body in them.

Organic abstract paintings endeavor to represent intangible qualities, such as atmosphere, memories, and the endless flux and flow of life. To view an abstract painting, one must make sense of the unfamiliar with the senses. The French have a beautifully striking phrase to describe the quality of light at twilight: it is the hour between dog and wolf. At dusk one cannot tell if an approaching canine is domesticated or wild, and we must use insight to decide. Viewers of Jaap’s paintings may have a parallel experience of feeling with their eyes, their emotions, and their intuition in order to understand the symbols and shapes communicated in the artwork: fog, ideation, fire, aspiration, deluge, and meditation.

Although they are not traditional landscape paintings, Jaap’s canvases often resemble an enterable space. The topography is energetic, as if a viewer could step into the painted primal cosmos, take hold of a vine, and swing through Jaap’s stream of consciousness. We may not always know why, exactly, beautiful shapes and colors appeal to us, but we do know that when we connect with beautiful forms we are hitching a ride on a trail to pursue a collective purpose.

Deeply rooted in philosophical transcendence and spiritual illumination, Anna Jaap’s Celestial paintings allude to the invisible world of betwixt and between wherein physical and nonphysical experiences collide and coexist. Referencing the sacred mid-point between the human experience and otherworldliness, these paintings represent the elusive enlightened moments of truth that are the rationale for our existence.

Intuitively responding to images from the natural world, each piece begins with color fields of mass and light, or land and sky. She then moves to add drawings and other materials as needed by each piece, including marker, drawing transfer, and oil pastel. She systematically eliminates the details on the canvas by removing areas of pigment. The process mirrors a physical and spiritual tension. Dense, heavy marks are applied to the colored ground and barely visible drawings are applied through transfer and erased from surface. Natural shapes repeat and mirror each other. Branches are spines. Rivers are nerves. Pods are cells or organs or spaces in the brain. She moves viscerally toward the exact composition that will encompass the ideals of her innate ideology. For her, the process is sustaining and natural and free of the ego.

The Celestial paintings portray the reckoning of the physical world and the spiritual world as well as the multi-layered past of humanity that is not always visible on the surface. They offer a visual history of our connection with the earth and symbolize the story of our continuum.

Anna Jaap has always reached for the sublime in the prosaic. Her colors come from the earth, from the soil and moss and leaves of the forest, and the grasses and sod of the prairie. Sunlight plays across her canvases, and fog rolls over them. Wayward leaves and branches scatter as if after a storm, invented sunrises and sunsets give rise to the title, yet the paintings are abstract in essence. Jaap's work is essentially grounded, and organic in nature, but ethereal and ephemeral, as well, suffused with the mystical. Reality and spirit meet and marry in these paintings.

The paintings in Apparent Horizon are like poetry, filled with meter and visual rhyme, they are like music, rythmic and fleeting, they are like fruit, luscious and ripe with understanding. These works are larger than Jaap has previously crafted, yet the size only enhances what we knew was there before, in the smaller canvases that now appear to have been explorations or sketches for the larger scale that would follow. Jaap's mind has always been expansive, but now her work is following suit.

Jaap is inspired by everything around her - walks in the woods, along streams, at any time of day or evening give rise to inspiration, so that although these paintings are about nature, they are also paintings about dreams and explorations, belief and fantasy and truth, in short, these are paintings about life at its most varied and beautiful.

"The wintry images featured here show bare branches painted in silhouette, over and under broad strokes of luscious colors that run from pastels to deep glowering tones. These paintings, for all their simple elegance, contain important elements of chaos. In several, Jaap draws on the surface with a felt-tip marker, an unstable instrument for drawing that tends toward scrawls. The marker scratches emerge from the landscapes as small, nervous voices of disorder.

More significantly, all of the paintings have black or very dark undercoats that come out through the brighter colors. The not-completely-suppressed dark streaks act as whispers of death, generating an ominous low-level rumble. These dark base tones, together with the marker scrawls, build a sense of wildness, something untamed and resistant to enclosure—a furtive, feral streak that is itself a pursuit of life. The sweet colors and solid organization of Jaap's paintings provide a context for darkness and messiness to express themselves dynamically—Eros and Thanatos inevitably paired.

The Infinite Landscape: Paintings and Drawings 2001-2006

"The Infinite Landscape" suggests a vast, limitless encounter with the out of doors, but there are indications that it is  more than that. Here and there are references to the physical body: the branching arteries around the heart muscle or the sinuous curves of an internal organ that could just as easily be a lake. The flow from inside to outside, both actual and imagined, is the real subject here. In her paintings and drawings, Anna Jaap has captured something nearly intangible: the human/nature connection. Familiar as it feels, when seen all at once it reverberates like a clap of thunder."